Standard and Smooth styles of ballroom dance are danced to smooth, flowing, often classical style of music, and are characterized by “rise and fall” technique and smooth, graceful movement. The differences between International Standard and American Smooth are more apparent.

The Latin and Rhythm styles have a distinctive musical genre characterized by powerful, rhythmic, often syncopated music, played traditionally with percussion and stringed instruments. This music embraces a rich cultural mix, derived from countries including Cuba, Brazil, Spain, the United States and areas of Africa. These dances are often characterized by “Cuban” hip movements.

The differences between International Latin and American Rhythm can be less distinct to the untrained eye and involve differences in timing and technique. Finally, you can find that these dance styles — such as Salsa, West Coast Swing, Argentine Tango, Hustle, Merengue, and other “club” dances — have further evolved into social dancing as well as made their way into the dance competition arena. 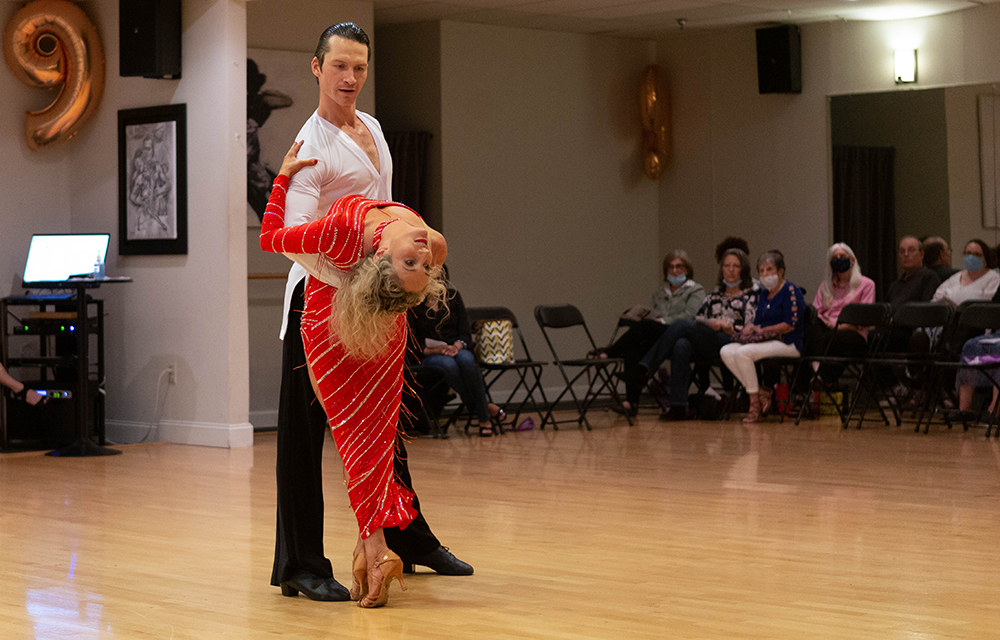 Bolero is a Spanish dance characterized by sharp turns, stamping of the feet, and sudden pauses in a position with one arm arched over the head. Bolero combines elements of rhythm dances, such as Cuban motion, as well as the rises and falls typically found in slower dances, such as Waltz. 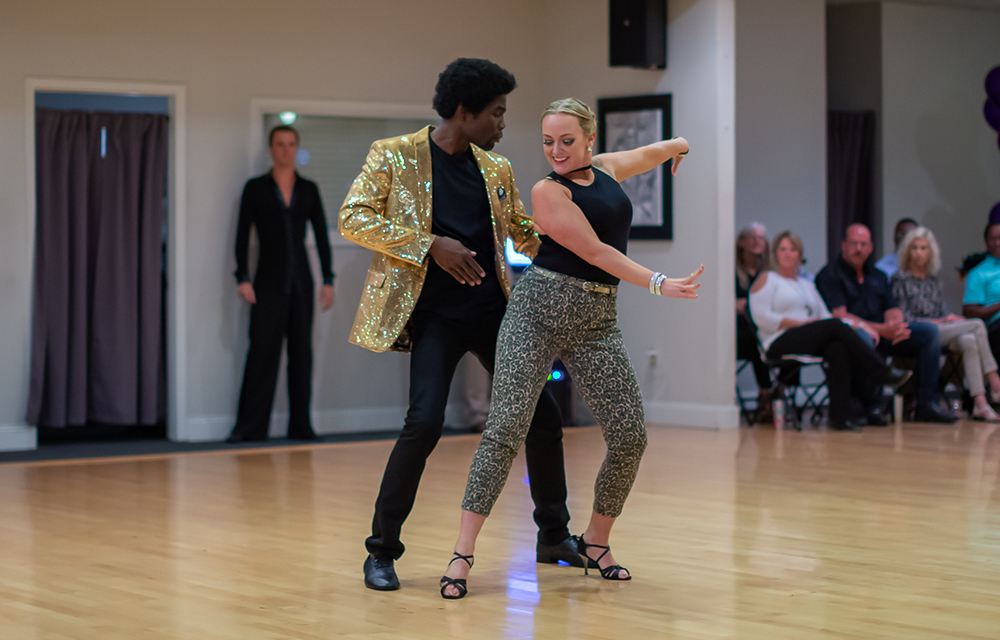 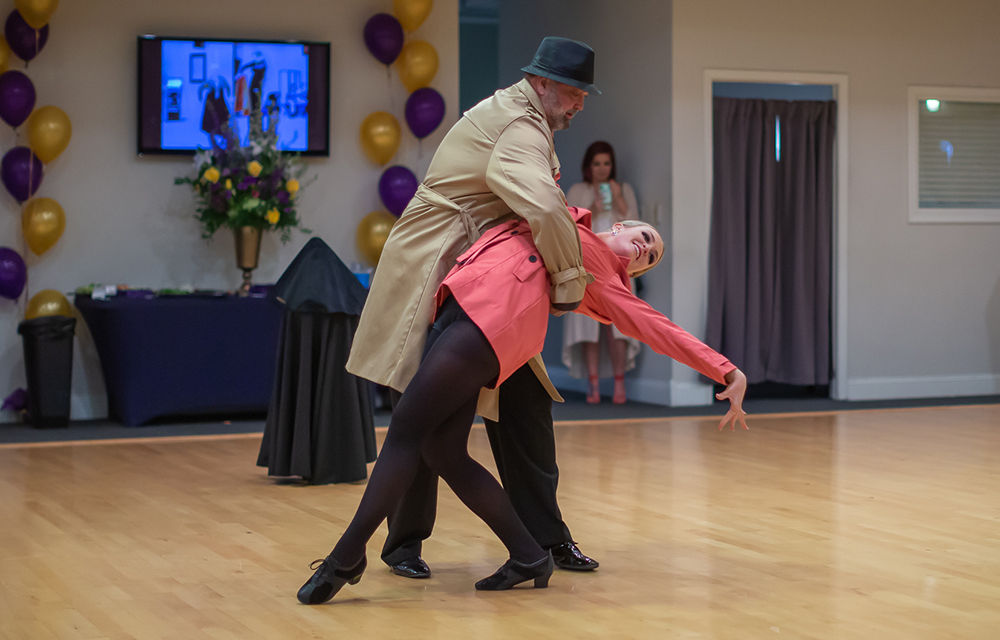 Often referred to as the “Rolls Royce” of the standard dances, the Foxtrot is composed of fairly simple walking steps and side steps. The dance combines slow steps and quick steps, such as “slow, slow, quick, quick” or “slow, quick, quick.” Foxtrot must be danced very smoothly and maintain proper timing.

Jive is a very happy, boppy dance featuring knee-lifting, bending, and rocking of the hips. The basic look and feel of jive is that it is performed with lots and lots of energy, with the legs portraying a pumping action. Basic jive consist of two triple steps and a rock step. Jive can be danced to a variety of upbeat music, such as Swing and Rock and Roll. 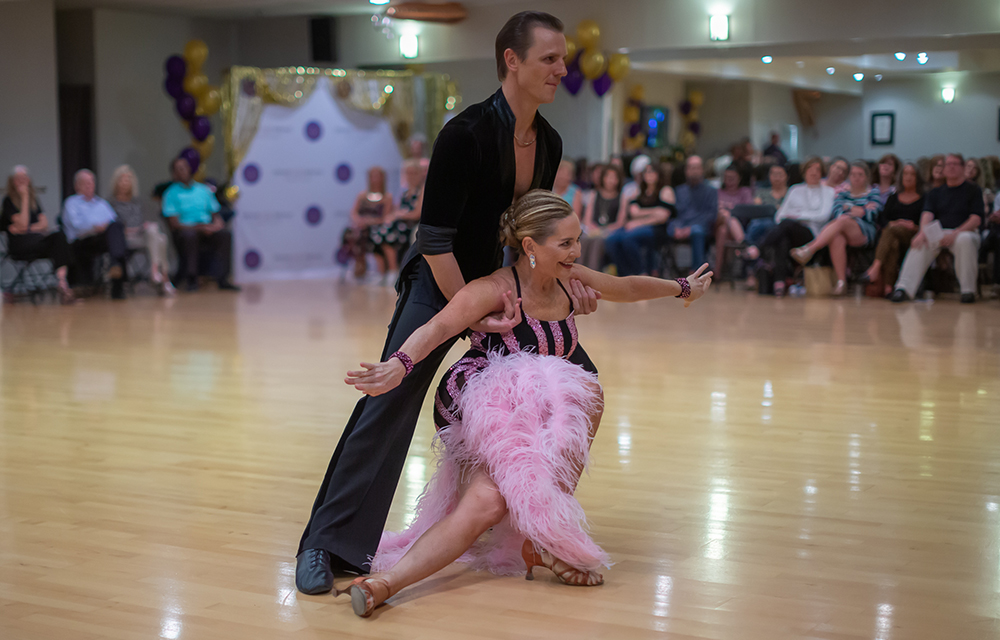 Mambo is a flirtatious, sensual dance characterized by high energy level and infectious rhythms. The common components of the dance include forward and backward motions, exaggerated hip movements, rock steps and side steps, with occasional points, kicks and flicks of the feet. 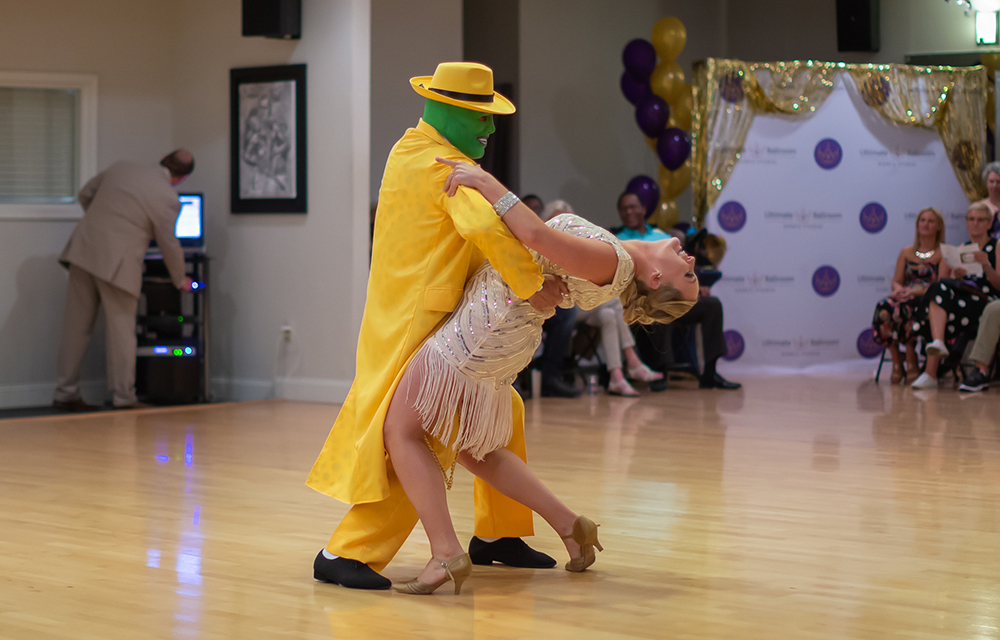 Elegant, smooth and glamorous, the Quickstep is a ballroom dance style composed of extremely quick steps and syncopated feet rhythms set to fast-paced music. Quickstep is an energetic and joyful dance which should give an appearance of being extremely light and airy while keeping the body posture straight and strong. 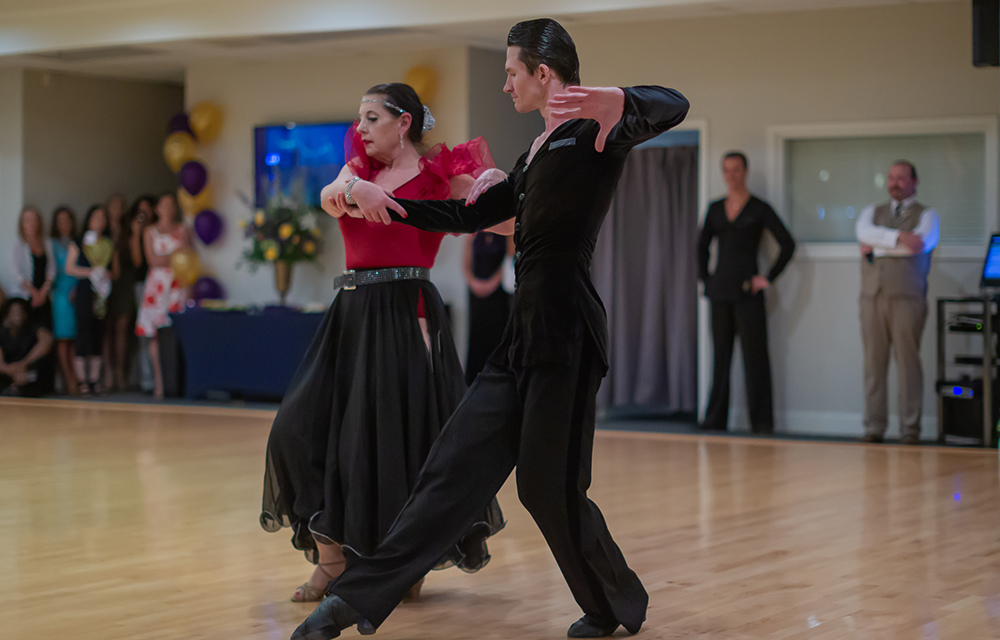 The Paso Doble is a lively dance modeled after the drama of the Spanish bullfight. Traditionally, the man is characterized as the matador (bullfighter) and the lady as his cape. Based on Flamenco dancing, the Paso Doble is both arrogant and passionate in its portrayal. In the Paso Doble, dancers take strong steps forward with the heels and incorporate artistic hand movements. 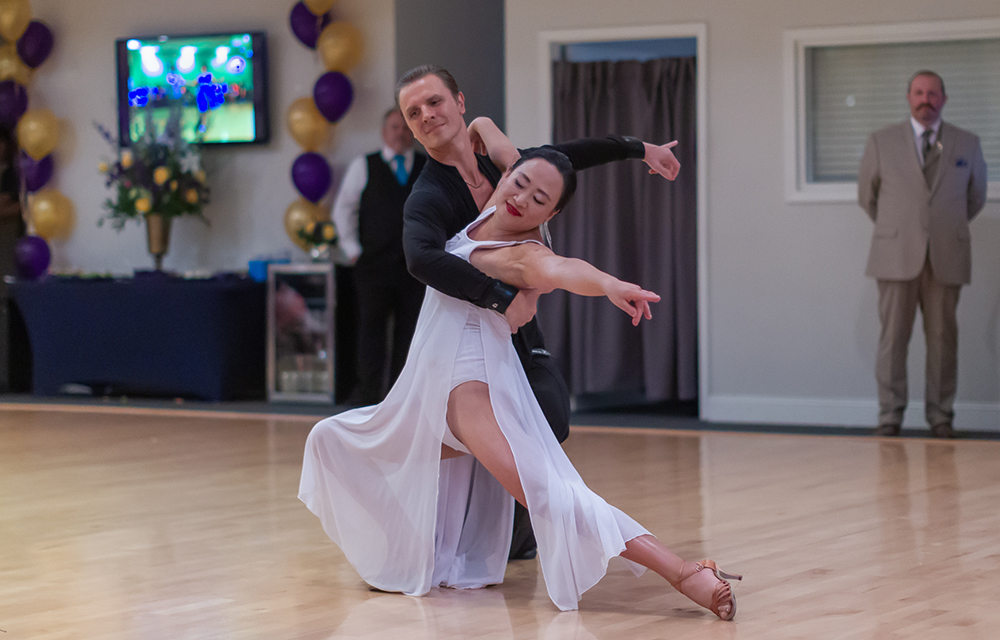 Rumba dance tells a story of love and passion between a man and a woman. Full of sensual movements, the Rumba is one of the most romantic ballroom dances. The Rumba spotlights the lady’s rhythmic body movements and hip actions and exudes flirtation between the partners. 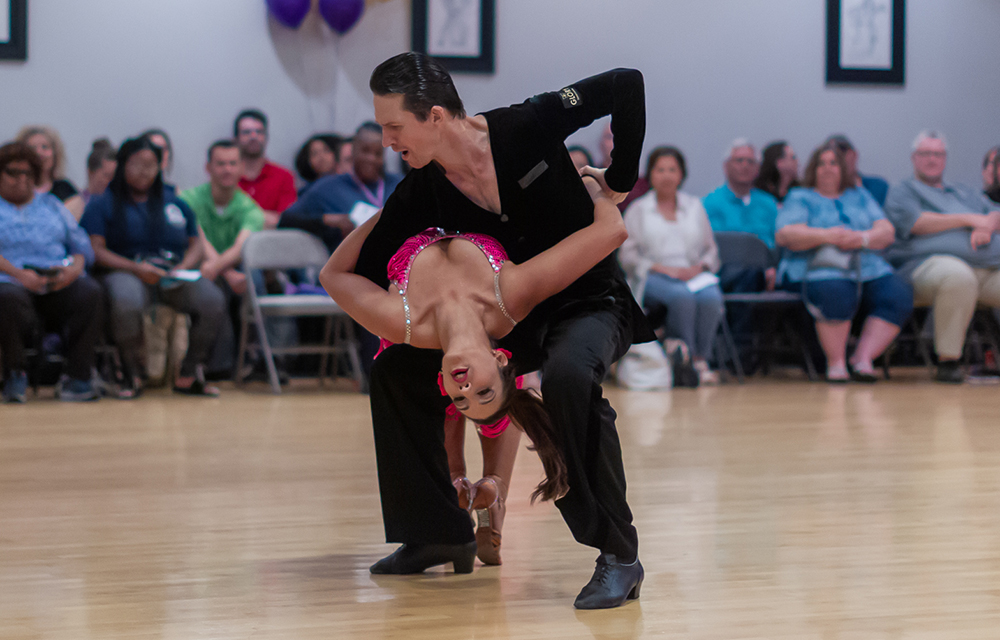 Originated in the Caribbean, Salsa is a very popular lead-and-follow dance that is influenced by other styles of dancing, such as Cuban Son, Cha Cha, Mambo and others. The basic movement style is left-right-left-pause, then right-left-right-pause. The dance involves lots of ornate movements and demonstrations of the body. 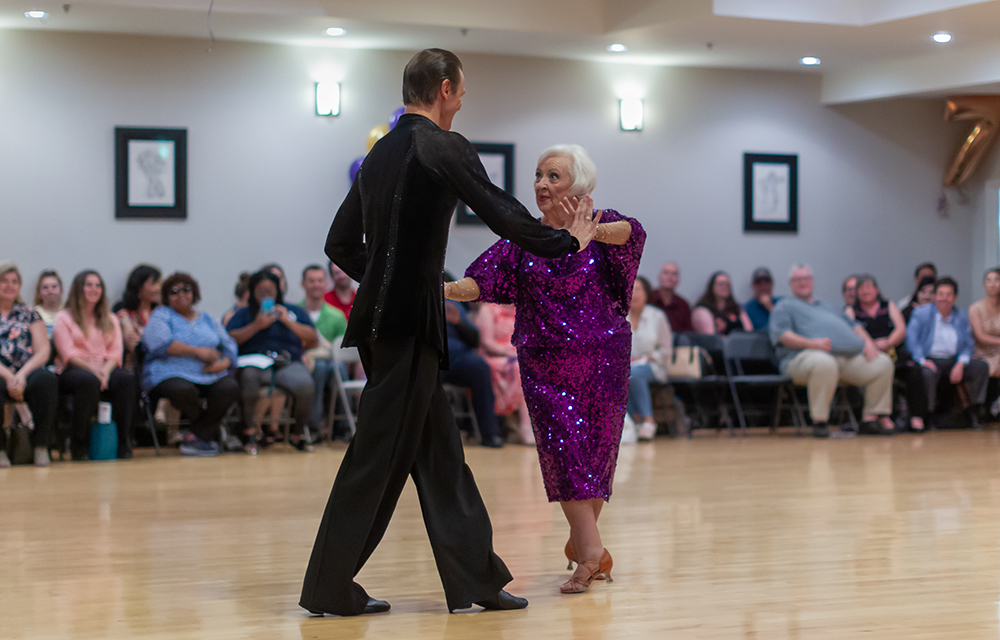 The Samba is considered the dance of celebration and joy at Carnival celebrations in Brazil. Samba incorporates elaborate tricks, turns and acrobatic feats into its basic set of figures. The major action of samba, known as the “samba bounce action,” gives the dance its unique look and feel. 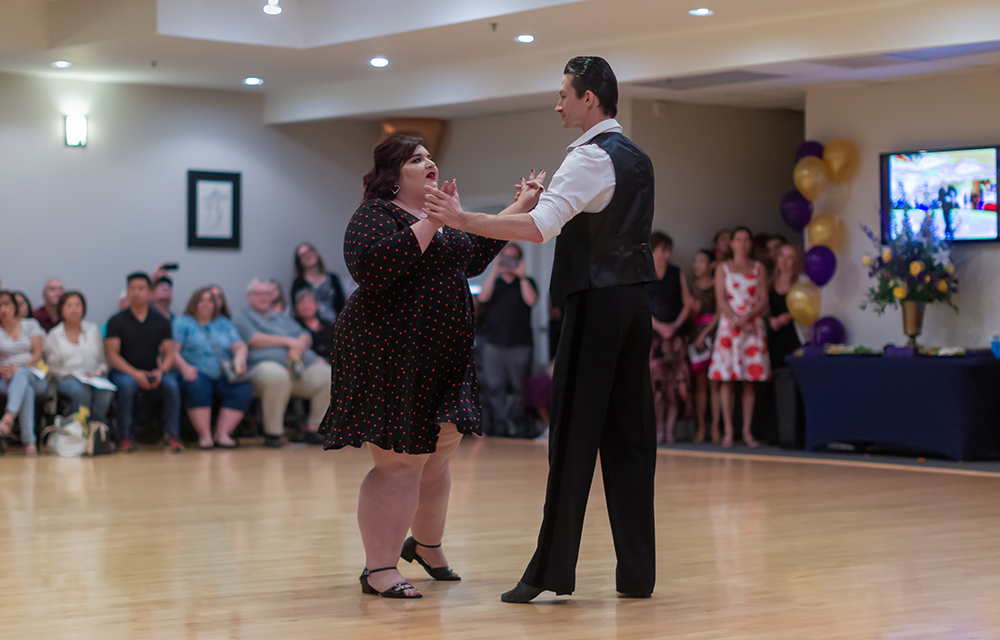 Swing dance is a quick, fast-paced style of social dancing in which a dancer often lifts, spins and flips his or her partner. Considered both hip and cool, swing dancing is a favorite among social dancers of all ages. Seen often on club or tavern dance floors, East Coast Swing dance was influenced by the Foxtrot. 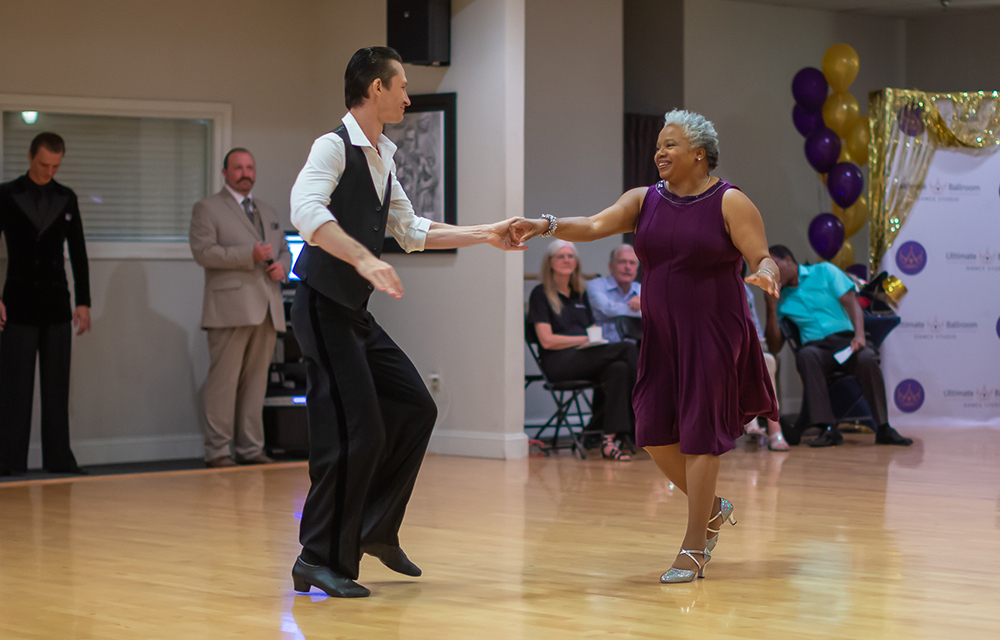 Swing dance is a quick, fast-paced style of social dancing in which a dancer often lifts, spins and flips his or her partner. Considered both hip and cool, swing dancing is a favorite among social dancers of all ages. West Coast Swing is slotted dance in which the follower travels back and forth along a rectangle, or slot. 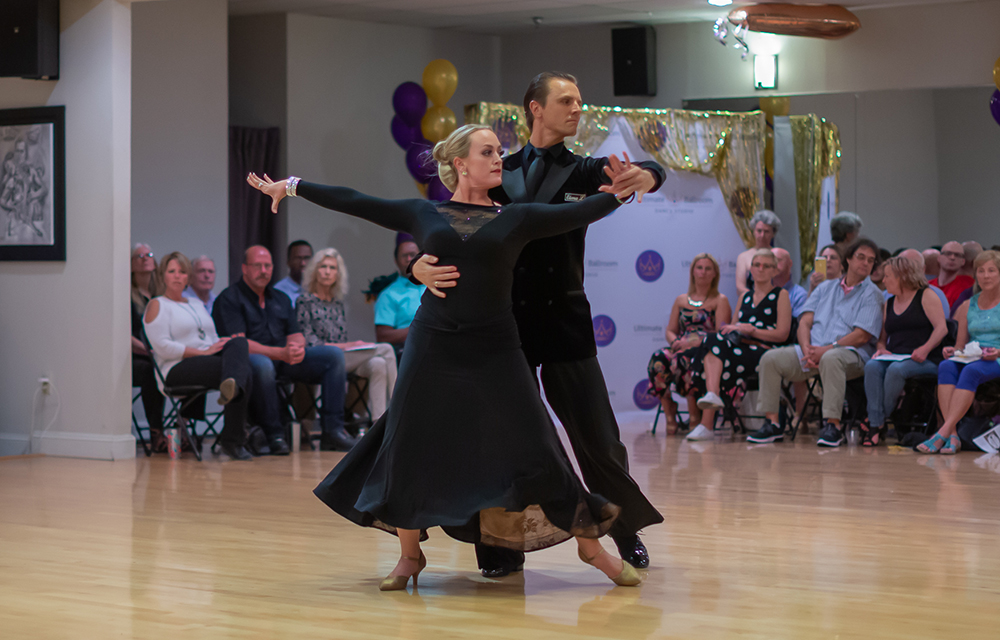 Tango is a sensual ballroom dance that originated in Buenos Aires, Argentina. Feeling the music, moving in a synchronized fashion and maintaining great connection to your partner are essential elements of this dance. Also, many people are familiar with “ballroom tango,” characterized by strong, dramatic head snaps. 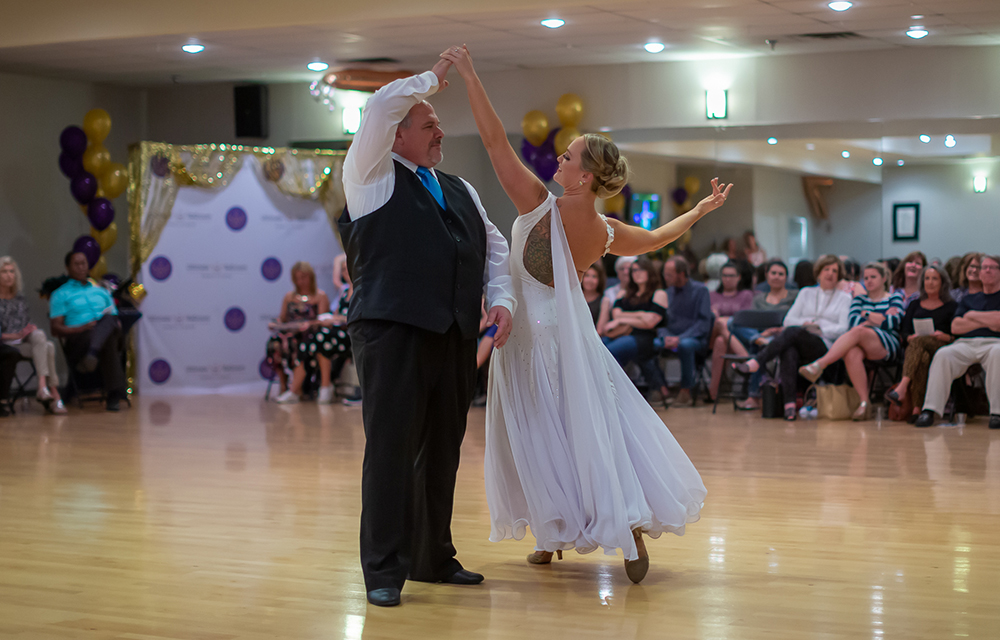 One of the most popular ballroom dances of all time, the Waltz is the basis for many dances. It is comprised of soft, round, and flowing movements. The music for Waltz has 3 beat count as in 1-2-3, 1-2-3. The dance technique is characterized by “rise and fall” and “body sway” and is achieved by moving the shoulders smoothly, parallel with the floor instead of up and down, and by lengthening each step. 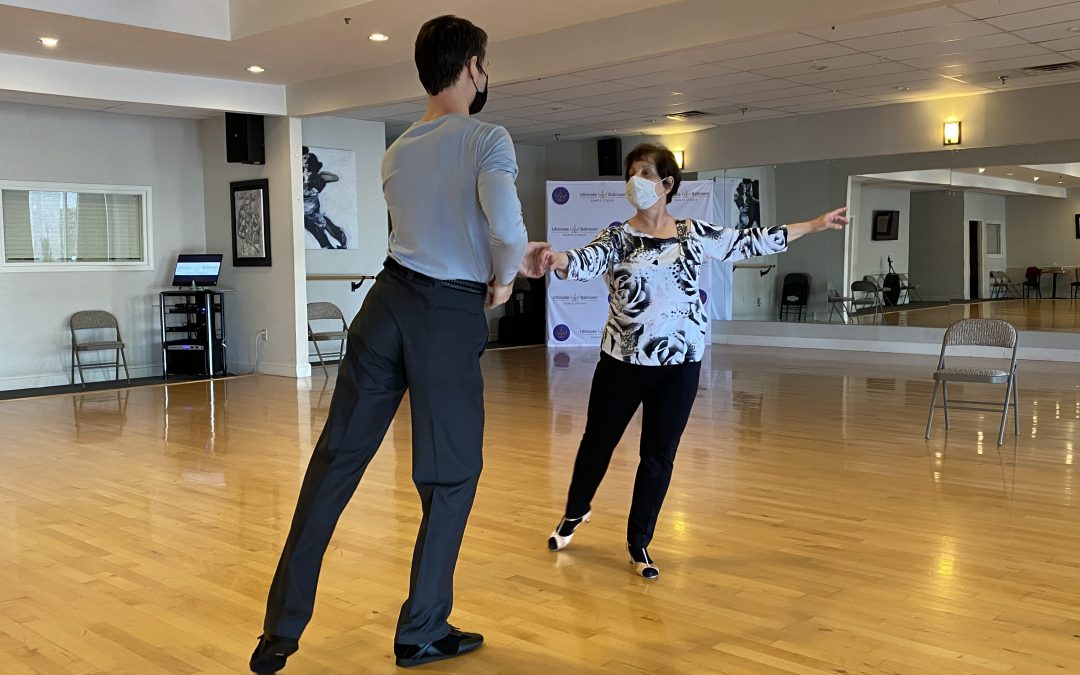 “The New Beginning” Ballroom Dancing is not a new concept to Marianne. Having grown up with dancers in her own family, she has been introduced to it from an early age and has been dancing for over a decade. So now, Marianne is ready to take her dancing to the next... 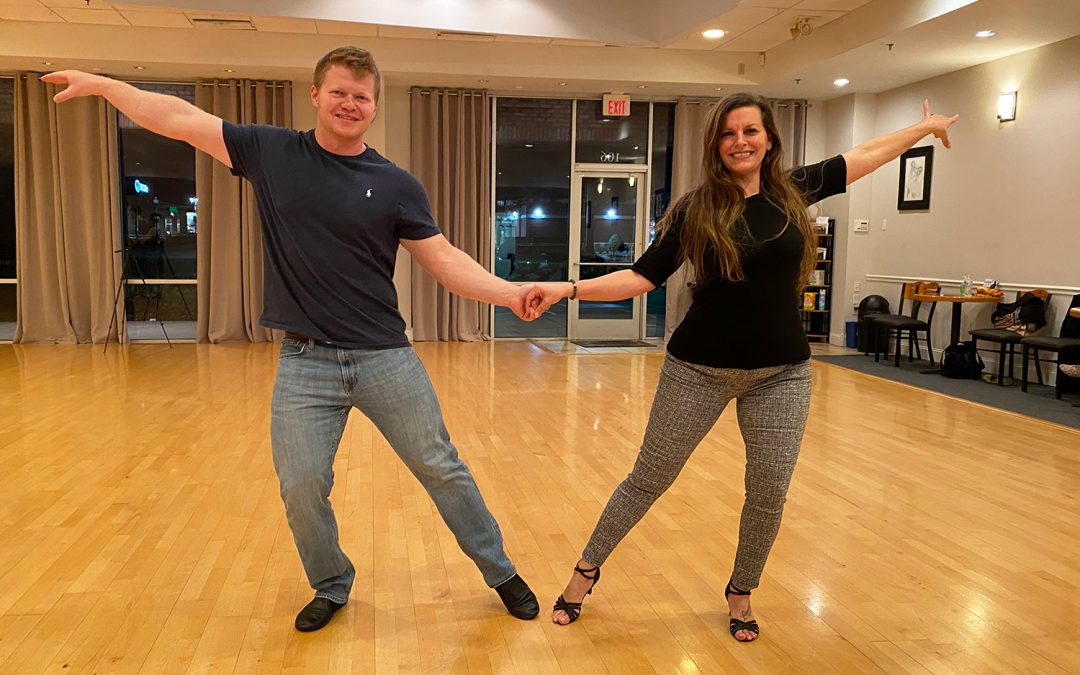 For some couples, date night may mean going out to a nice restaurant for dinner; for others, it may be ordering pizza and binging out on some Netflix. For Bryce and Nikki, spending quality time together has a whole new meaning! Bryce and Nikki enjoy having "their... 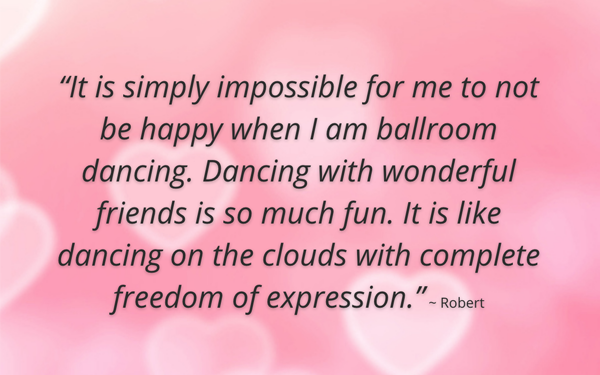 What I Love About Ballroom Dancing

Live, love, dance... What a better way to give and receive love than sharing a dance with someone. Human connection is the ultimate expression of love. When words are not enough to express our true heart, we take it to the dance floor and get swept away by the music... 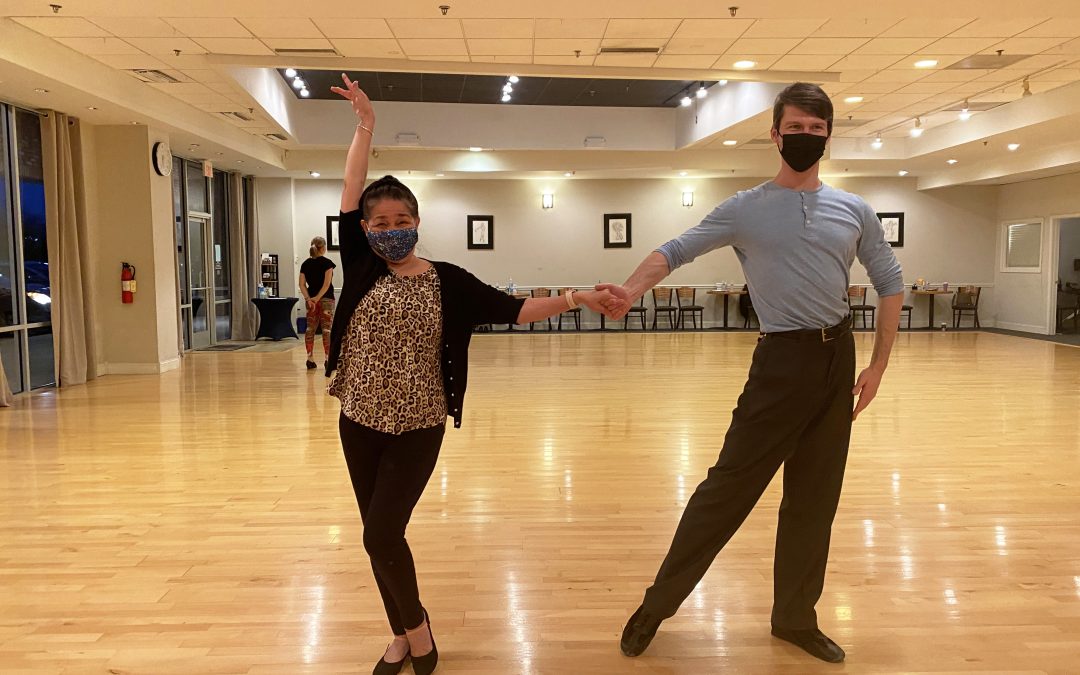 Meet Mercedes! She is one of the newer students at the studio. We sat down with her to find out about her experience at Ultimate Ballroom... How did you find out about us? I was looking for a dance studio near me, so I was surfing the net and found your page. I... 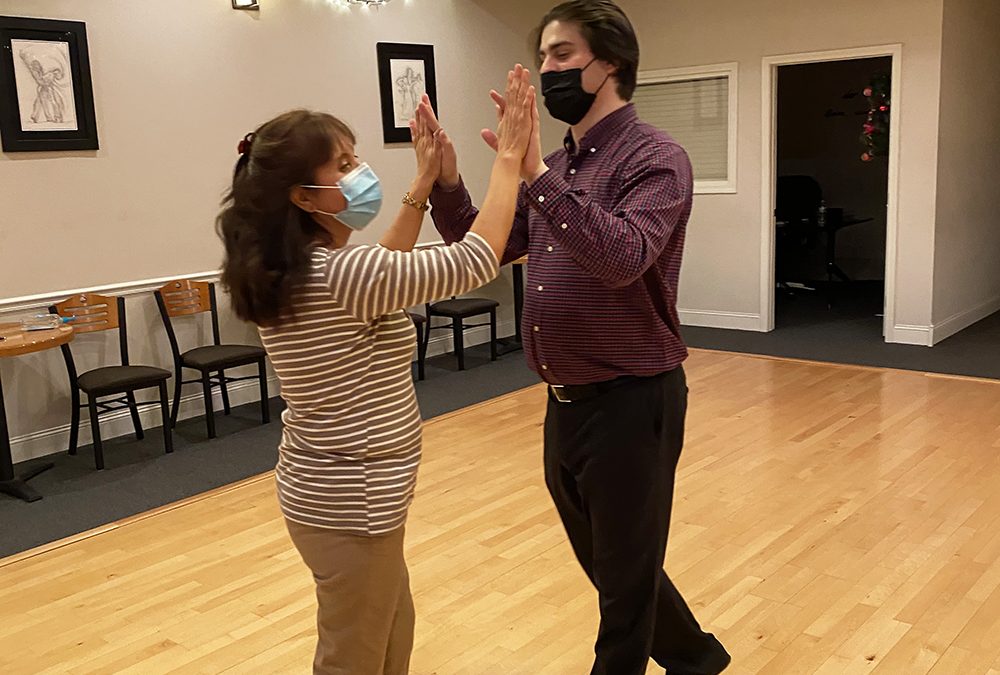 Miss Margarita used to dance ballet, tango and Latin dance mix in her childhood. No wonder she decided to improve her dancing in our studio! Miss Margarita found out about our studio from a friend and decided to check it out. Her first impression was positive, she...